Don’t have enough time for slow cooking? No problem! Make your pork carnitas in the pressure cooker instead. Great to stock the freezer with!

Admitting to my own wrongdoing isn’t something that comes easily to me.

Does it to anyone, though?

One of the single biggest mistakes in my culinary adventures was my refusal of the pressure cooker.

I believe I have talked about its importance in Swiss cuisine here before, in a pulled meat recipe such as the one I’m sharing today, though made with oxtail and not with pork.

Feeling as if you never fit in anywhere comes with its downsides and it’s easy to blame the mentality of your entire country for the perceived lack of acceptance, especially if one isn’t exactly brimming with patriotism.

All differences aside, I have made peace with many things. I have geraniums in front of my house (though the wild french ones, and they DO grow wild). I also call two pressure cookers my own.

They’re still stovetop ones, because electric pressure cookers haven’t quite made it to this corner of the world (no surprises there, we may be great watch makers, but we’re not the ones to adopt modern gadgets as the first hour strikes).

I mainly use it to cook legumes (because I’m impatient and don’t want to wait an hour for my chickpeas to cook) and big hunks of meat. Meat cuts you’d usually cook for hours on end turn out incredibly tender and flavorful in a much shorter timespan when cooked under pressure.

I know it is common to use a crockpot for carnitas – but eh. When have I ever followed rules about what’s common?

This is a ridiculously simple recipe. It is practically impossible to mess up.

You’ll brown the pork shoulder in the pot, then add seasoning and liquid, close the lid and cook for 90 minutes. (If you’re using an electric pressure cooker such as the Instant Pot, you’ll have to add 15 minutes to the cooking time.)

Then you can shred the meat with two forks and serve it up as tacos or however you like. You can, of course, brown it in a skillet, too. I’m just usually too harassed by hungry kids to bother.

When we make these pork carnitas, we usually eat some right away and freeze the rest in portions in freezer containers.

To reheat, simply thaw in the fridge overnight, transfer to a pot and heat until it is boiling, making sure the meat is evenly heated.

It is a fantastic way to have a satisfying meal on a busy weeknight, all you’ll have to do is pull out some taco shells, slice up some avocado and red onion, serve with lime wedges, crumbled cheese, cilantro and shredded red cabbage.

Some people might claim to have seen me eat the meat with my bare hands, no sides in sight, but I firmly believe admitting to one wrongdoing per day is sufficient 😉 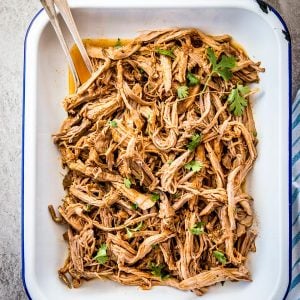 Don’t have enough time for slow cooking? No problem! Make your pork carnitas in the pressure cooker instead. Great to stock your freezer with!
Recipe by Nora from Savory Nothings
made it? tap the stars to add your rating!
No ratings yet
Print Add Review

Want to save this recipe?Create an account for free and start your personal Savory Nothings recipe box. Save any recipe by tapping the heart in the bottom right corner.
Join Now
Nutrition is an estimate. 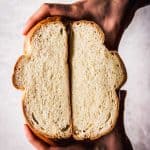 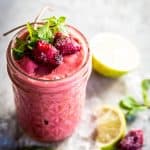