Confession time: I feed my family nachos for dinner.

I mean, occasionally. As a treat. ??  That was convincing, right?

Granted, it used to happen more often when Baby Savory was still a baby and not a very active toddler. But now that summer is fast approaching and my kitchen is blazing hot as-is, I’m looking for ways to turn on the stove and oven as little as possible.

Only that summer is still far away and the weather is more like 500 Ways to Paint a Cloud. But let’s be real for a minute here – does anything ever hold you back from making nachos?

See, that’s exactly what I figured. (OK, sometimes I don’t even bother with nachos and just make a homemade salsa instead…)

Of course it’s up to you to serve these vegetarian nachos as an appetizer instead of a main meal, but where would the fun in that be? Imagine this: A dinner recipe where you can throw everything into a skillet or baking dish, add cheese and put the whole thing under the broiler for 5 minutes. Five. Minutes.

And because there’s so many good things going on in these vegetarian nachos, I don’t even feel all that guilty about it. Unless my kid decides she only wants olives for her dinner – until she sees the avocados of course.

I know that some species in your household might complain about the lack of meat in their dinner. If you have a really hardcore carnivore at your table, you can easily un-vegetarianify these nachos with some shredded rotisserie chicken. Browned ground beef. Cut up hot dogs. I won’t judge, whatever your carnivore’s heart desires.

Now go tell your kids they can forget nagging you about dinner tonight, it will be on the table faster than they can say “Fully Loaded Vegetarian Nachos”.

Just as an FYI: I’m not responsible if they won’t stop running around the house shouting said phrase. 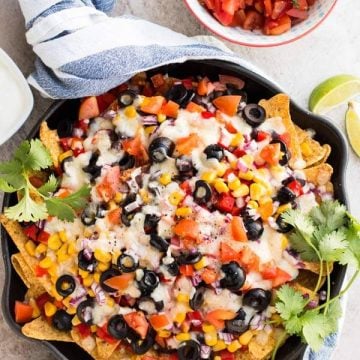 If you’re serving the nachos as a party appetizer along other things, the recipe makes enough to serve 6-8 people. 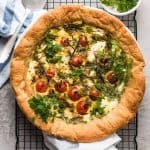 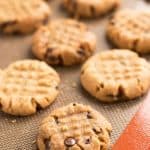