Potato Leek Soup is the perfect comfort food to warm you up on chilly days. This simple homemade recipe is quick and easy to make and turns out absolutely creamy and delicious.

Ah, potato soup brings back those wonderful childhood memories for me.

During the winter months, our local church would hold Soup Saturday where they served hot soup and sausages to raise money for charities.

Mom always took us there for lunch. As my brother hated soup he would protest. I generally hated leaving the house and my books, so I would protest, too.

But actually? I loved it. The old ladies serving soup. The sausages that were really wieners (frankfurters?). The fascination of everyone eating together, huddled around five gigantic tables.

And also, I was always allowed to get dessert. Leaving my books behind for a single hour suddenly seemed like a small sacrifice once that slice of cake was in front of me.

To be perfectly honest, I’m not entirely sure if that potato soup was homemade. Chances are, it was made from dried potato flakes. But then again, that was for 100 people.

Making potato leek soup from scratch just for your family is quick and easy. You should absolutely serve up a pot of it this winter.

I mean, homemade makes memories too – even better ones, if you ask me!

How to make potato leek soup:

Now a word about the blending: Some people claim potatoes turn into wallpaper paste when you blend or mash them with electric gadgets.

I claim they’re wrong, because I always make my mashed potatoes with an electric mixer and my grandma had three helpings on Christmas Eve. If that’s not the assurance that my mashed potato recipe is the best one out there, then I don’t know what is.

Bottom line: I always use either a stick blender or my Vitamix (read the instructions for hot liquids if you want to use yours!) after letting the soup cool for about 5 minutes. My soup is never wallpaper-paste-y.

Or maybe it is and I just have a taste for wallpaper paste? Who knows, all I know for sure is that a) I need to start writing things down more often so I remember to make chicken stock and b) this soup tastes amazing.

Potato Leek Soup is the perfect comfort food to warm you up on chilly days. This simple homemade recipe is quick and easy to make and turns out absolutely creamy and delicious.
Recipe by Nora from Savory Nothings
made it? tap the stars to add your rating!
5 from 1 vote
Print Add Review 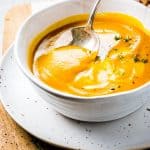 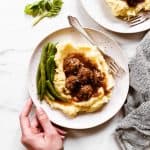