Fluffy Whole Wheat Waffles are a healthy breakfast and brunch treat you can whip up in no time. They take just a few simple ingredients you can find at any grocery store. You won’t believe these are 100% whole grain – everybody loves them! Serve them with fresh berries for a healthy treat this weekend! 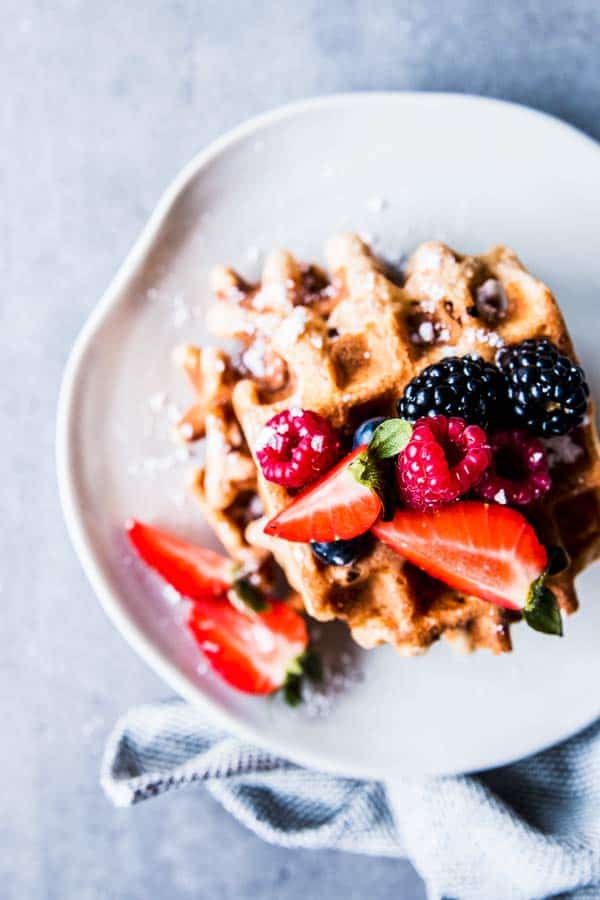 So. We have a small grain mill at home and bake bread from freshly ground grains.

Maybe. But hear me out:

I just think some foods are better left the traditional way without trying to healthify the recipe. And for the longest time I thought waffles were one of these things.

What can I say? These fluffy whole wheat waffles are an entirely amazing experience!

I mean I LOVE my fluffy buttermilk waffles, but I wouldn’t serve them for dinner. But these fluffy whole wheat waffles? Make an appearance at the dining table a couple times every month around here.

We’ll have a big salad as a starter and then eat the waffles with Greek yogurt, fresh fruit and maple syrup. My kids love waffles for dinner!

Now I know beating the egg whites separately seems like a fussy extra step, but it’s actually even more important than in regular waffles, as whole wheat flour tends to make the batter a bit heavier and more dense. So make sure you put in the effort for that extra step – it’s worth it! 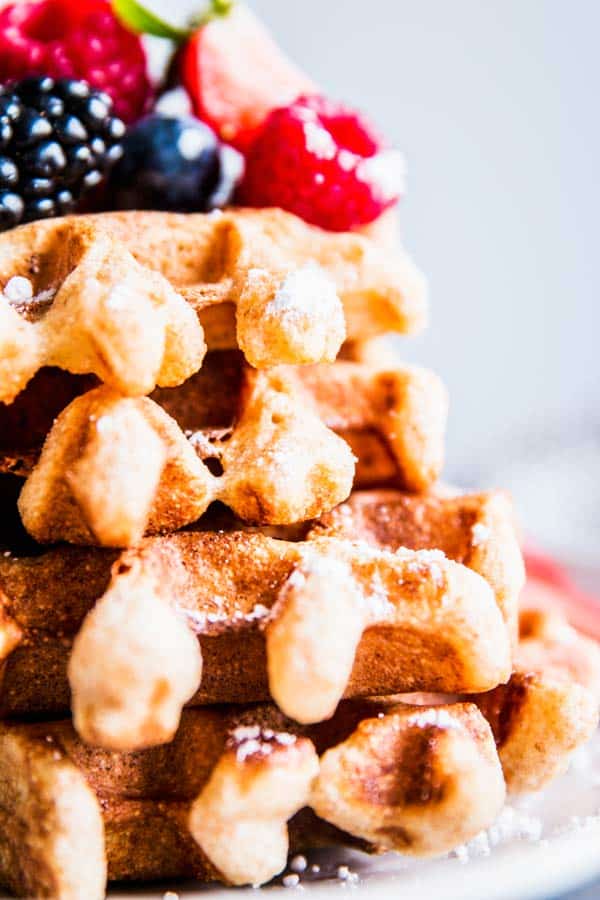 Use a large bowl so it’s easier to fold everything together later. Make sure you stir the dry ingredients well enough to evenly distribute the baking powder!

And don’t skip the cornstarch in the recipe – it helps making these whole wheat waffles extra light and fluffy!

I like doing this in a measuring jug to make it easier to pour the wet ingredients into the dry.

Whisk well until the wet ingredients are smooth – you don’t want to end up with bits of cooked egg yolk in the waffles!

I do this step after mixing the wet and dry ingredients because the whipped egg whites tend to get runny again after standig for a while.

I prefer a smaller mixing bowl and a handheld mixer for this – works super fast, 1 minute, max!

I beat until the egg whites don’t fall out of the bowl when slowly inverting it. A fun trick to impress the kids with 😉

First, add the wet ingredients to the dry and stir just until combined. Don’t use a whisk, use a spoon or a wooden spoon!

Then, fold in the egg whites. Do this carefully so you don’t knock out all the air, but do make sure you’re incorporating the egg whites well enough so you don’t end up with large bits of egg floating in the batter. That would turn into scrambled egg whites inside the waffles! 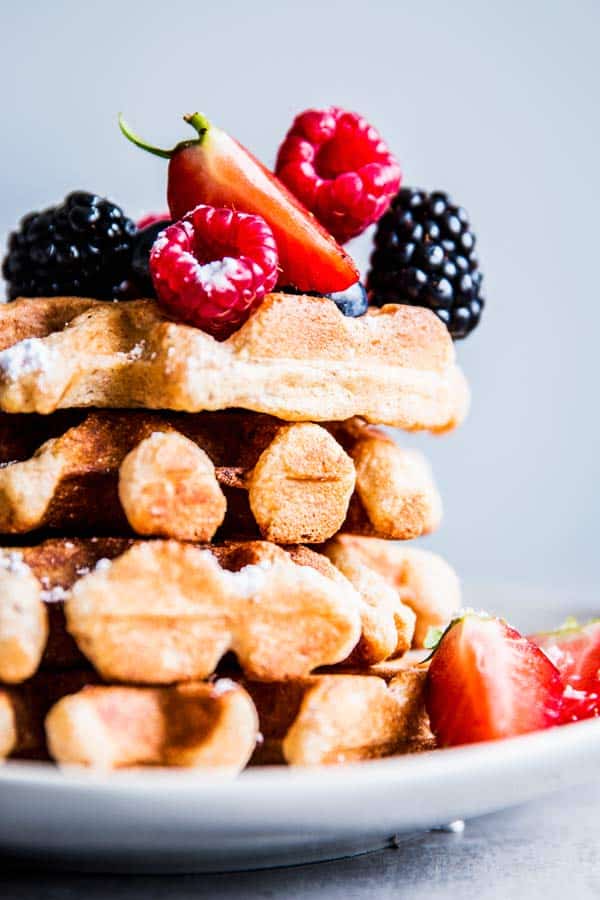 A while ago, I discovered the ease of scooping the waffle batter with a 3 tablespoon cookie scoop like this one, it’s SO much easier and less messy than using virtually anything else! FYI, I make a commission for purchases made through this link.

I use about ¼ cup of batter per waffle and cook them until no more crazy wafts of steam escape from the iron.

I figured the wet ingredients are cooked once the waffle isn’t as steamy anymore, which is when I take a peak to see how much longer it’s going to need to crisp up. 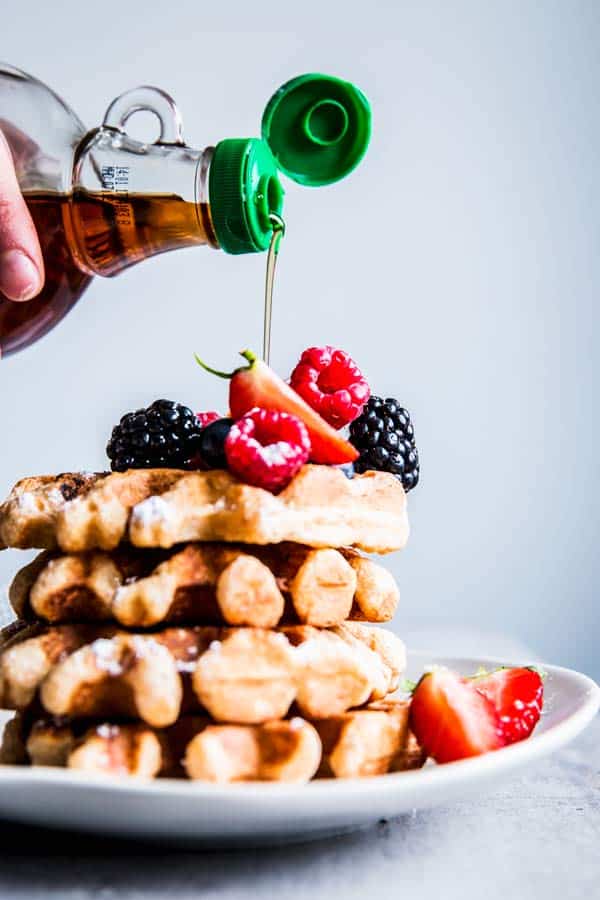 What to serve with these whole wheat waffles

As I already said, we LOVE Greek yogurt mixed with a little maple syrup for dipping the waffles.

Fresh berries are SO good with these, but so are sliced bananas, apple sauce or stewed fruit.

When I’m feeling ambitious I make a nice Greek yogurt fruit salad to go with these.

How to freeze the waffles

These are super easy to freeze! Just freeze on a lined baking sheet in a single layer until firm, then store in freezer bags for up to three months.

To reheat, just pop them in the toaster straight from the freezer. You can also bake them on a rack at 360F for 5-10 minutes. 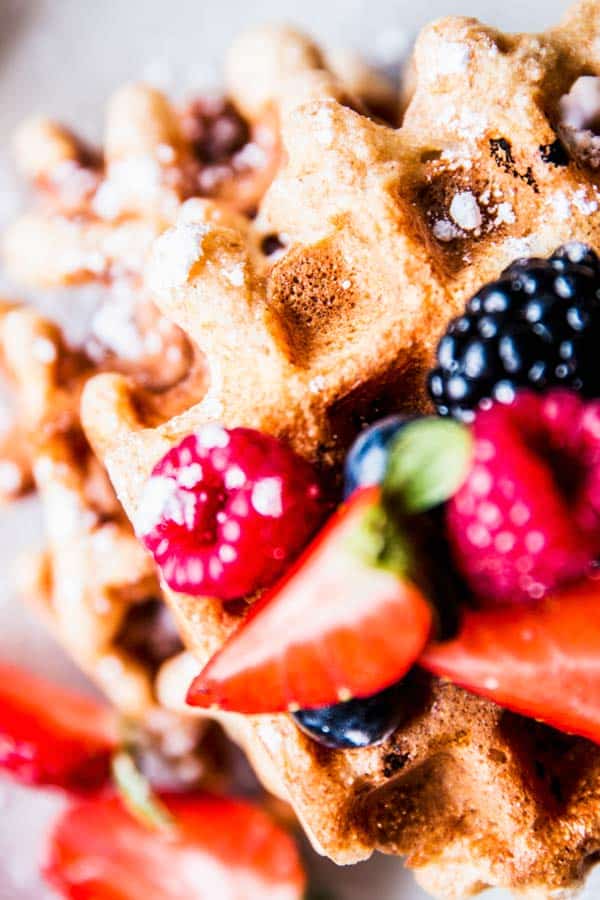 This is a breakfast-for-dinner recipe I definitely don’t feel bad about at all! Obviously we also enjoy these waffles for a healthy breakfast… But I think brinner is our favorite occasion for them 😉

Get the printable recipe for our best ever whole wheat waffles here:

Fluffy Whole Wheat Waffles are a healthy breakfast and brunch treat you can whip up in no time. They take just a few simple ingredients you can find at any grocery store.
Recipe by Nora from Savory Nothings
made it? tap the stars to add your rating!
5 from 1 vote
Print Add Review

To freeze: Place the waffles in a single layer on a lined baking sheet. Freeze for about an hour or until firm. Pack into freezer bags and label with the name and the date. 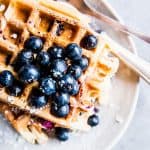 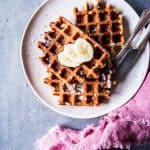