Pear Crisp is a simple seasonal dessert that’s quick and easy to prep. Loaded with fall spices, cranberries and a juicy pear filling, this is the perfect treat for autumn.

This post contains affiliate links and we earn a commission for purchases made after clicking through.

A Note from Nora

I have a borderline unhealthy obsession with crisps. And with Harry Potter, as long as we’re talking about those kinds of things...

Pear crisp is an especially delicious dessert to make during fall – and it’s so easy, even my kids can whip this up almost by themselves!

How to Make Pear Crisp:

Read on for the detailed step-by-step ingredients and instructions, or scroll down for tips and the printable recipe card.

This delicious, warm, fall spiced pear crisp is what we’re here for today. It’s filled with warming spices, real maple syrup and has the delicious addition of ground nuts in the topping – for extra flavor and depth. So good.

You can skip the ground almonds in the topping and use the same amount of rolled oats instead. Or replace them with any ground nuts you have on hand!

Replace the brown sugar in the topping with granulated sugar if that’s what you have on hand. The taste will be a little different, but still very delicious.

Instead of maple syrup, you can use granulated or brown sugar for the filling. Honey would also work well.

The dried cranberries in the filling are optional. I appreciate them for a pop of color and a more interesting texture.

If you don’t have the single spices called for in the recipe, use pumpkin pie spice.

Make the topping before you start with anything else, then stick it in the fridge while you prep the filling.

That way you get more of a crumb-y streusel topping vs a runaway situation.

2 Make the filling right in the baking dish.

I add everything to the dish and toss with clean hands. It’s a little messy, but I’d much rather wipe down my counter than wash an extra bowl.

It works better if your dish is a little roomier than mine (I would use a different one for personal use, but this one is so pretty for photos 😉 ).

This is a slightly bigger version of my dish:

Taste your pears before you make the filling, and use more or less maple syrup depending on their sweetness/tartness!

3 – Bake and rest the crisp the right way:

Don’t bake your crisp too hot (360°F is perfectly fine) and in the lower half of your oven (unless you’re using a convection oven, in which case it doesn’t matter as much).

That way your topping won’t burn, and the filling will get jammy and bubbly.

Allow the crisp to rest for 10-15 minutes on the counter before serving, so the juices can cool and thicken. It helps to dig a little hole into a few spots of the crisp to allow steam to escape from the inside (that’s weird, but it works).

Make your pear crisp up to 12 hours ahead and keep the cooled crisp covered in the fridge.

Reheat it in burst in the microwave (individual servings work better), OR place the entire baking dish in the oven at 300°F until the crisp is hot again.

How to Serve a Pear Crisp:

Last but not least… I know everyone loves a scoop of ice cream on top of their crisp… But can I be honest? I way prefer a spoonful of tart yogurt.

I did the whole ice cream thing for the photos here, but honestly: If you’ve never had cool, fresh yogurt on a warm crisp? Try it. It’s nothing short of amazing.

And I hear homemade whipped cream is pretty awesome, too!

P.S: The Harry Potter books, not the movies. I mean, they’re OK… But the books? Pure magic.

Get the printable recipe for my pear crisp here: 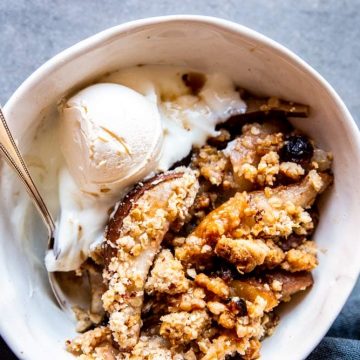 Pear Crisp is a simple seasonal dessert that’s quick and easy to prep. Loaded with fall spices, cranberries and a juicy pear filling, this is the perfect treat for autumn.
Recipe by Nora from Savory Nothings
made it? tap the stars to add your rating!
5 from 1 vote
Print Add Review

Try These Crisp and Cobbler Recipes Next: 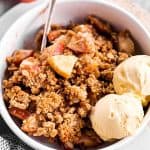 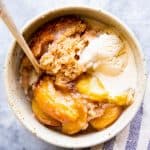 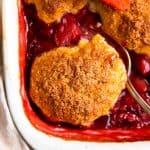 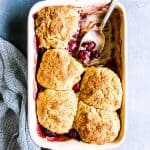 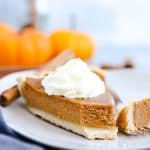 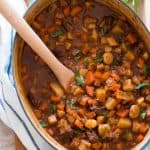